‘Project No Bucks’ took 40 years to complete, but boy was it worth it

Don and Steve Holloway grin when they talk about how long it took to complete their father-and-son project. Don started the restoration and then gave the 1947 Ford businessman’s coupe to his son when he was 11. That was 40 years ago. It would take all that time to finish the car.

Here’s the story. Don has been into early Fords since 1954 when he was 16. His parents, owners of a restaurant on Kingsway at Knight St., bought him a $100 car. It was an all-original 1935 Ford sedan from a car lot on Commercial Drive.

“I drove that car to high school and had as many as 14 kids in it on the drive home,” he recalls.

The cable-operated mechanical brakes wouldn’t stop the car so Don traded it for a 1937 Ford Tudor at the same car lot. The small 60-horsepower V8 engine only lasted a few months so he got an 85 horsepower V8 engine that he and his friends installed in the backyard of his parents’ home. That’s how Don learned mechanics. 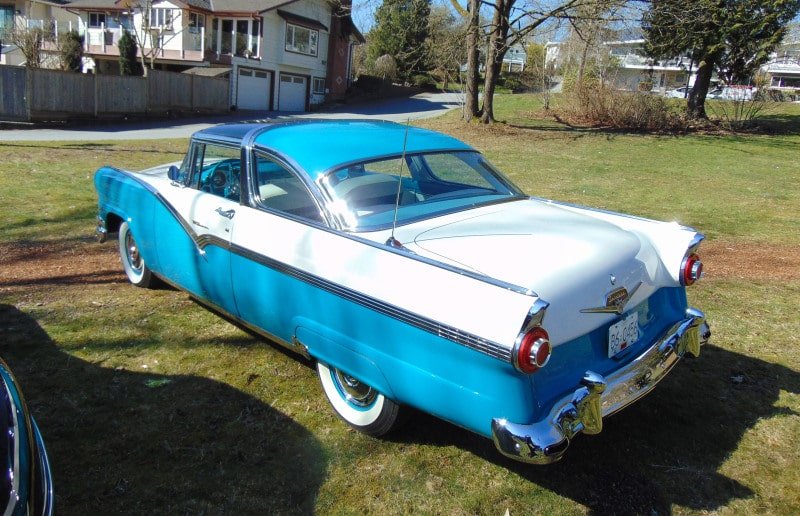 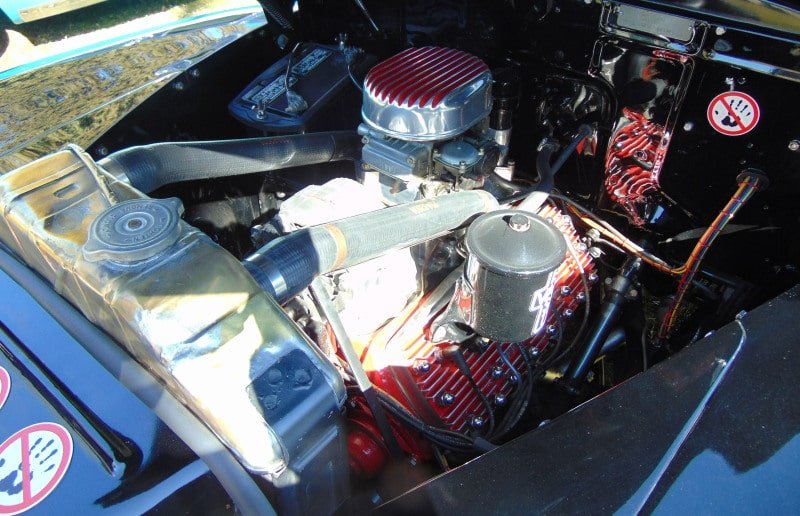 Moving up again, his parents bought him a customized 1940 Ford convertible for $300 from a car lot on Kingsway.

“It wasn’t a very good car and had quite a bit of body rust under the paint,” Don recalls, adding he traded that car for a 1946 Ford coupe that was in better shape.

But he yearned to get another open car and found a 1946 Ford convertible in a wrecking yard on East Hastings St. in Burnaby. “It was a really good car, but the engine was shot,” he says.

By that time, Don and his friend Dick Whelan were running an auto wrecking business specializing in 1946 to 1948 Ford and Mercury cars out of Don’s parents’ backyard. They were never without parts to repair their cars. It was 1958, Don’s last year at King Edward High School, and he installed an Oldsmobile engine in his convertible for more power.

“I eventually sold that car to make the best investment of my life,” he says. That was an engagement ring for Maureen who would become his wife. They were both 23 years old.

But he pined away for another 1946 Ford convertible as he moved on with a career as a BC Telephone repairman. It was about that time that he acquired a very nice 1947 Ford businessman’s coupe with no rear seat and a giant trunk from his friend Dick Whalen.

“I told my son Steve that it would be his if I could find another convertible,” he recalls. As luck would have it, he was able to buy a convertible needing full restoration for $100 and Steve got his car at the age of 11.

Don taught his son how to weld and paint in the garage at their south Vancouver home as he completely restored the convertible. For power, he installed a 350 cubic inch Pontiac V8 engine coupled to an automatic transmission. He and Maureen drove that car to the Early Ford Grand National Meet in Dearborn, Michigan in 1983.

Steve remembers seeing his father’s 1947 Ford coupe as a very young child. His father had originally wanted to turn it into a hot rod and cut up the frame for a big engine. When he changed his mind, deciding to restore the car, he left the body sitting on sawhorses in his in-laws’ garage. When he acquired the car, it was moved to his parents’ garage and he and his dad began the restoration.

“My friends would ask me what I got for Christmas and I would proudly tell them I got my bumpers chromed,” he says of the low buck, do-it-yourself restoration project. His father’s friends would often give him parts and paint for the car and he scrounged some new parts from suppliers. “I was just a kid and they gave me stuff.”

Father and son completed most of the hard work including body and paint while Steve was still a teenager.

“I moved away and got into muscle cars,” Steve says of the stalled project that was supposed to be completed for his high school graduation. “Basically, life got in the way and the car sat for twenty-five years.”

Last year, his car club encouraged him to put his car in a show. With that promise, Steve and his wife Marie got busy, spending 300 hours finishing the car including upholstery work. The car made it to the show and, 40 years after he his father gave him the car, he was finally driving it.

Proudly naming the father and son restoration ‘Project No Bucks,’ Steve tallies up the total cost at $6,600. After all, he got the car for nothing from his dad.